Almost two years onwards we are still living in the shadow of a world-wide pandemic which has cast a dark spell on the planet’s inhabitants. There is uncertainty, despair and fear. There seems to be developments almost on a daily basis. We ask ourselves; “what are we doing to deserve this?” We are taking pity on ourselves yet it is always a worthwhile exercise to reflect and compare what we are going through now with other experiences of the past. We know that the older generations before us were resilient and durable. No matter what happened, the comforting thought was that it could have been worse. We think of those whose lives spanned much of the last century; without electricity, running water or any kind of phone. Our younger generations would not be able to imagine life without the modern necessities. Life in Ireland was usually lived against the background of some catastrophe or other. We think of the First World War, War of Independence, Civil War, Spanish Flu and then the Second World War that had dire consequences for the whole world. The world was robbed of six years of normal living. In Ireland there had been continuous poverty, unemployment and emigration. Living through those times was a constant ordeal. For almost two years now there has been an enormous upheaval in the lives of all of us. It has forced us to rethink and refocus. As someone put it, we had lost the run of ourselves. We had lost the sense of preciousness of life; life is a gift at any stage no matter what.

One of the most inspiring stories that came out of the Second World War was the story of a young girl named Anne Frank. She was a German of Jewish heritage. She was born in Germany in 1929. Adolf Hitler was the leader of the Nazi Party and he blamed the Jews for the problems of Germany. For safety reasons Anne’s family moved to Amsterdam. When the war broke out life became much harder. There were strict rules for the Jews who could no longer move about freely. In 1942 Anne’s family went into hiding in a specially built room in her father’s business premises. Anne had received a present of a diary on her birthday. During the two years in hiding, she wrote a diary about events in her small room but also about her feelings and thoughts. But then in August 1944 the hiding place was discovered and Anne and her family were arrested and sent to the concentration camp. Anne was to die in the Spring of 1945. After the war her diary was found and published and was to sell millions of copies. In her diary Anne writes what it was like for a young girl growing up in the midst of persecution and war. She spoke about the loss of human dignity in times of great suffering and the terrible toll it took on the young. Her thoughts have been a great inspiration for so many others since then in their struggles against injustice and cruelty. Her legacy is still very much alive. She stands for all those countless others who have suffered just as she did but whose faces have remained in the shadows. Anne Frank became a symbol of hope and kindness. Through her words we are reminded of the terrible cost of hatred. That hatred to a greater or less degree persists in our world today. Her most important message is that all people have a right to live in freedom and be treated equally.

That message is relevant for all of us again this Christmas; that we can learn from the tragedies of history and that we can live up to the true sentiments of the season. Our hope is that we can appreciate what Christmas is all about. The great slogan of the Pandemic was that all of us are in this together. It is only through co-operation and unity of spirit that we can begin to solve the great and the small problems of the world. As again what the old people said in the past; “it could be worse”.  If there was no need for Christmas then the world would indeed be a very gloomy and dreary place.

A great light has shone in the darkness, a light that darkness could not overpower; we are all sharers of that light especially at Christmas. Christmas is about celebrating others; celebrating their presence rather than their presents, appreciating what others have done for us; deepening our sense of belonging with one another and with Christ himself. Because of Christmas he gives us a divine dignity. In the midst of so many problems in our planet and in our world, we need to celebrate the great feast of Christmas more than ever. We celebrate the birthday of the Son of God, the source of all goodwill and love and because of that we are all God’s children and we are all linked together as one. May we all have that spirit of peace, hope and love this Christmastime that can guide us through the coming year.

The Christmas Dues Collection will be taken up at all Masses this Christmas. Collection boxes are placed inside the doors of our churches. There are extra envelopes at the back of the churches. We thank all those who contribute to the offertory collections for the upkeep of both Banogue and Croom Churches. On the Croom parish website there is an opportunity to donate if you so wish and this will be greatly appreciated (IBAN: IE72 AIBK 9350 9302 901184). We thank all our volunteers who are actively involved in the work and activities of the church in Banogue and Croom and also acknowledge the contribution of so many in the different groups and organisations in both parishes.

One of the features of the Christmas decorations is the Remembrance tree in Croom Church. You are invited to write down the name of a family member(s) living abroad on one of the tags provided and place it on the tree. This Christmas more than ever our thoughts are with family members living abroad and who will not be home. Also, they have been denied the opportunity of attending the special family occasions such as funerals and weddings. It will be an emotional and lonely time for all our emigrants and we stand in solidarity with them this Christmastime.

May They Rest In Peace.

We congratulate all the children who received their First Holy Communion and Confirmation in both Banogue and Croom during the past year. It has been a difficult year for all concerned because of the continuing Covid uncertainty. We thank the parents and teachers for their patience and understanding. 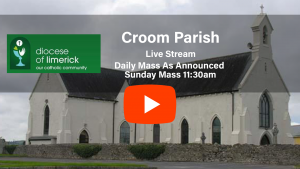 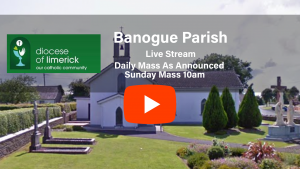